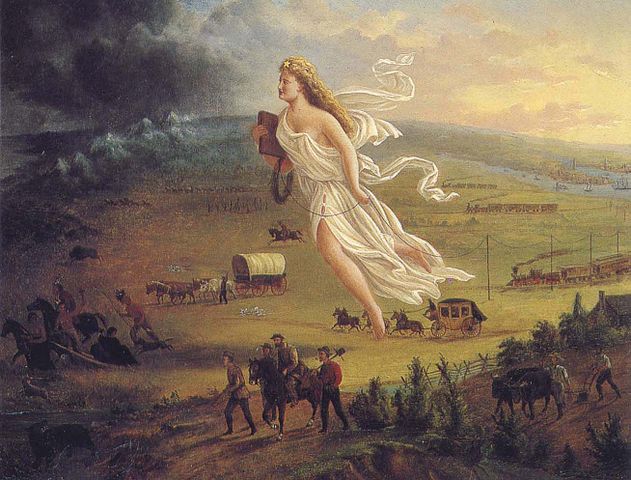 American Progress (1872) John Gast
American Progress (1872) is a patriotic painting by John Gast portraying the beauty of our country’s expansion.  Yet, was America’s expansion this destined, peaceful movement of the country spreading west?  In the painting, Gast shows that it was the America’s destiny to expand, spread technology, and civilize the untamed west. Manifest Destiny was the idea that Americans were destined to rule the continent but it is totally incorrect because it allowed the Americans to take and destroy the land, the animals and native people.  John Gast justified Manifest Destiny by using symbolism and imagery to show the west as uncivilized, wild and unruly which America must naturally colonize and dominate. In addition to this, the idea that westward expansion was peaceful is very incomplete and one-sided because, unlike the painting, the reality of America’s westward expansion was often violent as the United States believed that America was destined to expand.  ​

John Gast’s perspective on Manifest Destiny is that the west was given to the Americans to settle.  In actuality, the west belonged to the Native Americans who had lived there for thousands of years until the settlers came and took the land and put Native Americans on reservations.  Gast portrays Manifest Destiny using the symbol of ‘Lady Liberty’ as an angelic looking woman floating above the landscape and guiding the American people west.  She is an unstoppable force just like America’s destiny to expand.  John Gast is a very patriotic man, yet his views are incorrect.  Manifest Destiny was a way to justify the settling of Native American land and the destruction of the natural habitat.  Is it hard to imagine the opposite Native American view after seeing the white people take their land, kill the bison, the natives’ main source of food, and then confine them on reservations?  Manifest Destiny is a wrong and incorrect view of westward expansion, because it justified the conquering of the west and the destruction of a way of life.

A second major idea of John Gast’s perspective is the contrast between the east as a light place and the west as dark.  What he is depicting is that the east is enlightened, a civilized place that has technology and is a very well educated.  The darkness of the west is saying that it is a wild and uncivilized place, needing modern advancements.  Native Americans, because they are on the left side of the painting are shown as a wild uncivilized inferior group running away from the superior white people.  All of this led to the reasoning that is was okay for Americans to take their land, and force them to learn English.  This view is also incorrect, for the Native Americans were civilized people that had very different cultures.  That does not mean that the Americans were superior, and it should have meant that they should have respect for each other and their ways.  Unfortunately this did not happen, as the Americans used the idea to justify their conquering of the west.

A final idea of John Gast's painting is that American expansion was a peaceful movement.  In his painting there are hardly any weapons, only a hunter holding a gun, and a Native American, while raising his tomahawk, is running away.  Since there are no weapons in the painting it subconsciously gives a peaceful feel to westward expansion just as Lady Liberty glides over the landscape in a non-threatening way.  All of that detail shows Gast’s view that the expansion was a peaceful movement that was meant to happen.  In reality, America’s westward expansion was full of bloody wars, fighting, killing, and massacres as the Native Americans resisted the attempt to take their land.  There was lots of violence, but Gast did not put it into his painting because it would counter his patriotic and positive view of the westward expansion.

American Progress justified the conquering of the west.  In his painting, John Gast’s ideas of Manifest Destiny, the contrast between the civilized east and ‘uncivilized’ west, and his belief that it was a peaceful expansion gave the impression that settling the west was the right thing to do.  Even though some of this was true, historical evidence points to a different understanding of America’s westward expansion as it involved destroying the bison herds, breaking treaties and violent clashes.  This painting, though, probably convinced many Americans to ‘Go West’ to the frontier believing that it was a great and noble undertaking.  So did this perspective lead to the Massacre at Wounded Knee?